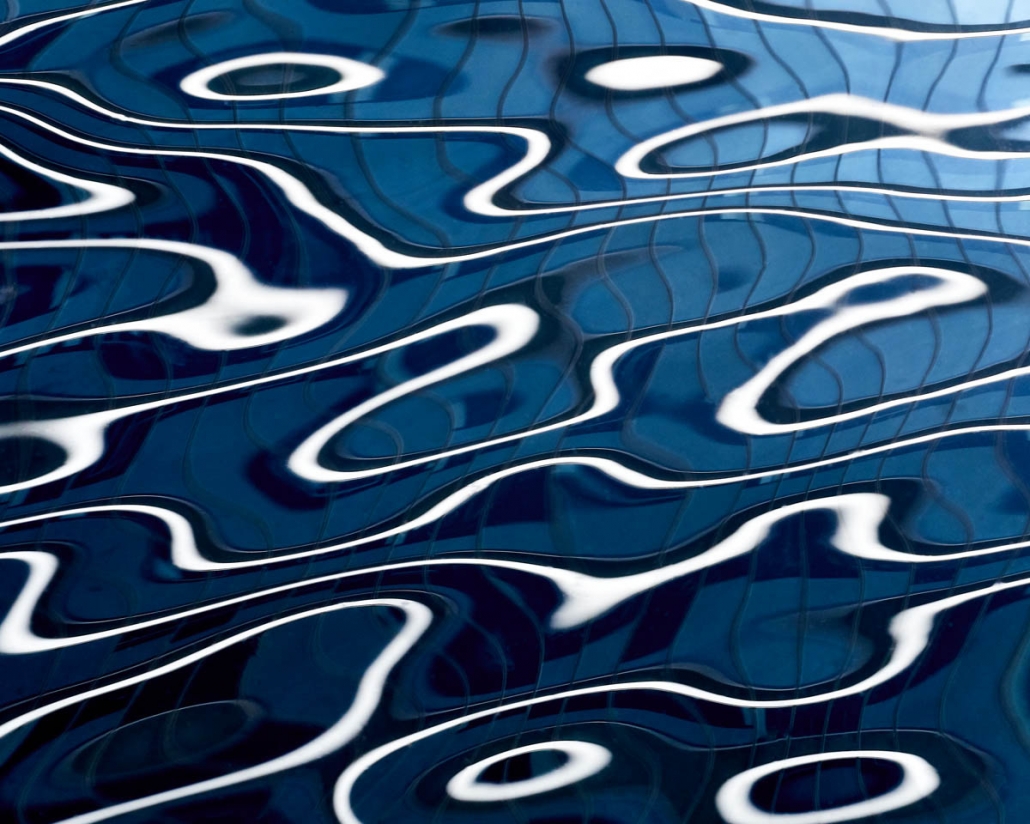 “The sense of energy at Canary Wharf is palpable; it’s not a place that is often associated with quiet contemplation. Yet pausing for a moment reveals real beauty and softness alongside the corporate architecture; the patterns and colours can be mesmerizing like a kaleidoscope as they change with the light and weather.

With so much activity all around, capturing these colourful images requires a focus that isn’t immediately obvious to passers by; I can spend hours at a time examining one body of water, waiting for something out of the ordinary – I sometimes think I might be the only person who is still among the crowd.”

Attending the first On Landscape conference was a bit of a revelation for me creatively – I had made many trips to locations like the Lakes and Scotland that are usually regarded as highly productive for photographers yet came away with nothing that I felt was remarkable. Jem Southam’s talk about his concentrated and detailed studies of his local area helped me realise why my previous approach wasn’t working for me.

If anyone asks about what my photography influences are, I think of what fascinated me as a child, playing for hours with a kaleidoscope, spirograph and etch-a-sketch and being captivated by the endless variation of colours and shapes you could create. Later on I connected with artists such as Rothko, Klimt and the photography of David Hockney; those themes still inspire me. I realised the sort of photographs I was producing before the OL conference had no roots in what enthused me. So I decided to be more focused and, on being given a creative commission for the Canary Wharf Group plc, and a 24/7 access all areas pass for their site, some ideas began to germinate.

Having to return to the same location time and time again over several months, I began to notice shapes and patterns that motivated me to try to capture in photographic form the images that I was I visualising in my mind. It was precisely because I returned repeatedly that I began to realise the potential for them as a project, a project that would take the next four years to develop into something fruitful. It was probably no coincidence that connecting with something that really interested me meant I was more productive and happier with the results. Winning the ‘Your View’ section of Landscape photographer of the Year in 2015 with an image from the series made me feel I was on the right track somehow.

It was very much a trial and error process getting the technique right to create what I was imagining I could record but when I did I barely noticed at the time taking them, it was pretty common to take over 600 images over 4 or 5 hours and get only one or two I was happy with. The type of weather I preferred and my availability to coincide with it slowed the process down greatly as only certain conditions seemed to create what I was looking for. But it’s no bad thing to have to wait sometimes to make progress; it sort of makes it more exciting.

The whole process became like a form of meditation for me and felt very rewarding, which only fuelled more photography. I doubt that I will find an end to the project as I enjoy it too much but, then again, why would I want to end it if I am still enjoying it?

You can see more of the work here:  https://www.mikecurryphotography.com/product-category/portfolio/reflection/